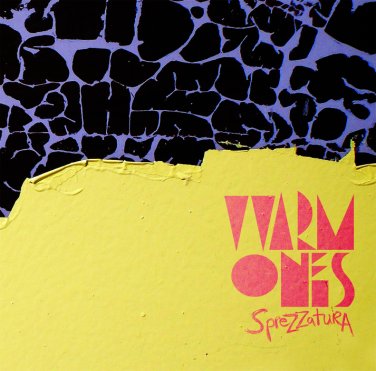 Opening number “Bacteriostatic” leads Sprezzatura with a total bang. It’s a brash and loud three-minute romp that pounds at the ears for its entire running time.

The guitars are super noisy. Tony Sackett yells his vocals. Actually, he screams, too.

And so begins Warm Ones‘ debut album, an ambitious 14-track mix of indie rock and pop that sounds like it’s from a band that’s been around a lot longer than the five years Warm Ones had under its belt before releasing Sprezzatura.

Take “Small Spies,” which features guest vocals by The 1900s‘ Jeanine O’Toole. It’s a lovely him and her tune where Tony and Jeanine trade vocals back and forth — as if we’re eavesdropping on a conversation between Tony, who states something, and Jeanine, who counters.

They play former lovers, or maybe just lovers who are undergoing a battle of trust. And it’s vastly different from the boisterous “Bacteriostatic” that came before it. This one’s easy going and light pop.

I’m amused by Warm Ones’ wide range of styles. “Bacteriostatic” and “Small Spies” are probably the most opposite that you’re gonna get. Then there’s “Get Shit Set,” which begins with a lengthy rock intro before Tony even hits the mic.

And again, he sounds different from the Tony we’ve heard up to that point. He isn’t the screamer or gentle crooner we heard before, but an impassioned soul that all but begs for the person he sings to to take him seriously.

If you’re familiar with another Chicago band, Johnny Rumble, we recently reviewed in this space, a number of Warm Ones’ songs reminded me of them, too. In Particular, “Hot Flash.” Though the song doesn’t do too much for me lyrically, it has an upbeat-ness about it that would’ve aligned pretty neatly with the track listing on JR.

Give Johnny Rumble’s “Handgun Blues” a try to see what I’m getting at. Both it and “Hot Flash” — which is a bit harder — are backed by harmonized vocals and driven by drum beats.

Perhaps the most surprising thing about Sprezzatura is that Warm Ones threw in what I assume are a violin and maybe some synths on “Quiet Epilogue” — the disc’s catchiest tune — and then a violin again on the album’s final number, “Like a Game (Parts 1 & 2).” Orchestral pop is probably my favorite genre at the moment, so Warm Ones’ try at it was certainly welcomed.

As I said, Sprezzatura is an ambitious debut. And Chicagoans will get the chance to try ’em on for size live when they play The Empty Bottle in a few days. Ticket info below!

Enjoy this review? Check out other Music Reviews on Chicago Tunes!

Hello there. Email your things to chicagotunes[at]gmail[dot]com.
View all posts by Eric →
This entry was posted in Music Review, Warm Ones. Bookmark the permalink.

5 Responses to Warm Ones – Sprezzatura